Disney is really cashing it in on all the live-action remakes. Their most recent, "Aladdin" alone earned up to a whopping $925.3 million worldwide. And clearly, what's not to love about them? They bring back memories of people's childhoods as well as introducing these stories to new generations in a more authentic and grandeur way. Speaking of "Aladdin," this film is the perfect example of how Hollywood can approach a treasured and ethnic story with accurate casting and authentic imagery. One really felt the spirit of the Middle-East in the 2019 film, as opposed to the more Americanized humor of the 1992 animated classic.


In fact, there were a lot of changes that really made the story shine in this remake. Here's a list of the top 10 best of them that maybe caught your attention as well.


Will Smith’s Rendition of “Arabian Nights”

You gotta love Will Smith in this film! Not only did he deliver one of the best performances in the film, but he also let everyone know how talented a performer he truly is. None proved this better than his opening number, "Arabian Nights." In the original film, the song was sung by an unknown character in the land of Agrabah, but here, Genie sings it to his kids. The smooth yet richness of Smith's voice makes this number work like a charm. He adds a bit of exoticism to it without, however, sacrificing the narrative overtone in the performance. In fact, he was so good at this that his autograph on a movie poster would be worth a lot of money right now!

Surely ladies wouldn't have objected if Mena Massoud portrayed Aladdin the way he was in the film. Wearing just a bare-open vest with nothing underneath. However, there's something endearing about Massoud's more modest Aladdin. While the cartoon version was more of a lovable yet rambunctious little thief, his was a more sympathetic character that felt lost in a big and busy city. You felt sorry for Massoud's Aladdin even though he could survive well on his own and, well, he's a thief.  Such people in society don't deserve your sympathy, and yet he does. A testament to this young star's serious acting chops!

Jasmine Wants To Be Queen

"I am not a prize to be won!" will always be one of the best lines ever uttered by a Disney Princess. But even with this strong moment, the animated Princess Jasmine still lacked something that Naomi Scott's portrayal tapped into in the 2019 remake. Here, she wanted to be Queen. Yes, Scott's Princess Jasmine still felt trapped in the palace, but rather than sulk and rebel by going out a few times, she actually wants to achieve something and be someone. She wants to be the new sultana of Agrabah, not end up a wife of another sultan. 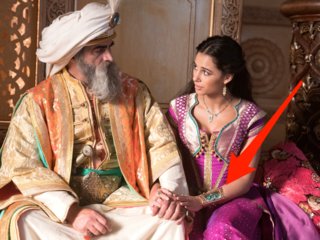 And speaking of the sultan, let's all appreciate the fact that he's a more serious character in this 2019 live-action remake than in the original cartoon film. Though it's hard not to love that adorable plump sultan in the 1992 classic, it made more sense that the leader of one of the most powerful kingdoms in the Middle-East was ruled by a fair, stong-minded, yet good-natured sultan. He was less of a pushover for Jafar to hypnotize whenever he pleased. He showed sympathy for Jasmine's feelings, yet headstrong in doing what he thought was right for his daughter.  Now, this was a true sultan!

Very rarely do new characters make a good impression, especially when they're in remakes of such indelible classics. But you have to admit, Nasim Pedrad's Dalia was a great addition. Firstly, she made Princess Jasmine seem and stay sane by having a human friend to talk to (sorry Rajah!). Her comedic timing was also perfect, especially when juxtaposed to Will Smith's own funny moments in the film. And the fact that the filmmakers gave Genie a love interest in this film was an interesting move that definitely worked! Who knows? If there's a sequel, Dalia might even come back and be better than ever! On the subject of new characters, Prince Anders was also a great addition. Billy Magnussen was terrific in playing this snooty European prince who wanted Princess Jasmine's hand in marriage. He was the perfect contrast to Aladdin: pompous, strange, and extremely unaware. His comedic timing was as good as Dalia's and he provided a better scope of Agrabah's importance in the world. Though he only had a few moments on screen, he stole the show in every single one. And while audiences never found out about his fate in the ending, here's to hoping he'll come back if ever they'll make a sequel! A notable similarity among all of Disney's live-action remakes is that they provide better contexts for the villains. From Cinderella's step-mother to a whole film dedicated to Sleeping Beauty's Maleficent, the audience is given the reason as to why these villains do what they do. The same goes for Jafar. In the animated film, the only thing viewers knew of Jafar was that he was an evil sorcerer who wanted to rule Agrabah with the help of Genie. In this live-action remake, however, he tells his story of having been a penniless soldier climbing up the ranks to become the sultan's adviser. It's more sinister knowing he might have hurt or killed people to get to where he is now!


Very rarely do audiences get to know whatever happened to the princesses' dead parents. Though their absences drive most of the stories, it wouldn't hurt to give viewers some context. At least, 2019 "Aladdin" did that. In the film, the characters mentioned Jasmine's mother more than they ever did in the original animated film. Audiences found out that her mom came from another kingdom, one that Jafar plans to attack, which further angers Princess Jasmine. You also find out that her mom was a smart woman, similarly to how curious and inquisitive this new Princess Jasmine is. While it's a shame Jafar never turns into a giant snake, audiences did get to see a big Iago. And it was a more than welcomed change since Iago, in this film, wasn't as active as in the animated classic. Here, he's just a regular parrot that repeats what Jafar says. As opposed to Gilbert Godfried's comical portrayal of a highly-annoyed bird for comic relief. But you have to admit, the moment the parrot become somewhat of a gigantic phoenix-like creature, it was movie magic at its finest!

What does every Disney Princess need? Her own song! And while "A Whole New World" was great and iconic on its own, her new song in the film, "Speechless" had way more impact. Not to mention Scott's stellar performance both vocally and on the screen during her big number. The song had everything you wanted in a Disney Princess solo: heart, strength, and a great voice! It sounds like Disney has another classic in their hands!


Disney’s “Aladdin” may have premiered a few months ago, but the craze is still alive and well among many Disney fans! Which moments did you think were the best in the 2019 live-action remake?